Mickey Mallory, RMC ministerial director, addressing the large crowd which had gathered to witness and support Davidson in this important ministry milestone remarked that it was a miracle Davidson was able to be there. Mallory went on to explain that just a few weeks ago, holding the service seemed impossible when Davidson’s health took a sharp decline and he was anointed.

Davidson met Karen, his partner in ministry, while attending Andrews University in 1982.  After owning and operating two businesses and being a parent to two children, Codi and John, God called them into ministry in 2006.

“In the fall of 2006, our church held a Revelation seminar. They began at a neutral location where I was involved with information and security. When the seminar transitioned to the church and I was not needed at the entrance, I was able to take part in the remainder of the seminar. As I sat and listened evening after evening, I can remember saying to myself, and to God, “I can do more.” I believe this was the Holy Spirit talking to me and calling me to be a laborer for Him. The Lord was changing me and transforming me into being willing to be used by Him. Would I be willing to go if asked? Yes! If was asked to go speak, I would go. If I was asked to help, I would help.”

Pearsall related an incident which she had witnessed a few days earlier as Davidson returned to the campus after an absence due to his medical condition. “He was here for the school bonfire awards night and the children saw him and started screaming, ‘Pastor John!”’ They came running over to him, but stayed six feet away to ensure he didn’t get sick anymore.  We’re waiting impatiently for him to come back full time.”

Louis Torres, assistant to the presidents for evangelism of AWR, explained the history of ordination and the great responsibility that comes with it during the ordination address.  He explained that being ordained was like a wedding.

Ed Barnett, RMC president, invited all the ordained and commissioned ministers in attendance to surround the Davidsons to not only support them in ordination, but to pray that physical healing occurs.

For Davidson, being ordained means, “being confirmed by your co-laborers in spreading the message of the gospel of Jesus Christ.” He added, “I never actually thought I would be ordained. The Lord was going to use me here and there and I was going to do what the Lord was asking me to do.  Ordination was never on my radar.  This was a surprise and it will be a blessing.”

Davidson says he is thankful to the leadership at the conference for recognizing his ministry. “I am thankful the Lord has opened the door for me to serve in the Rocky Mountain Conference. Thank you, RMC leadership, for the opportunity to labor with all of you in this conference, but most importantly, for Jesus.”

The service ended with Davidson and his wife kissing in response to the crowd shouting ‘Kiss her’, in reference to the wedding analogy. 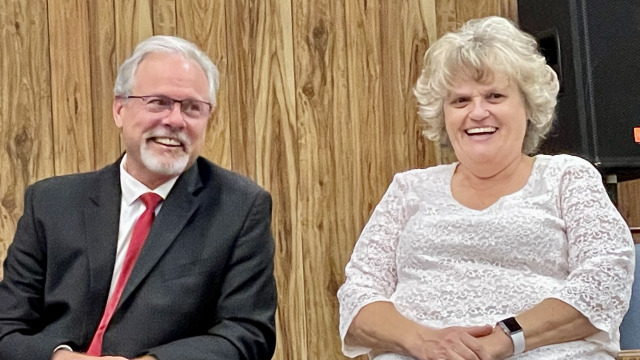