In the month of January, the Women’s Ministries director developed a plan to hold thirty days of prayer revival, after which the women would make an attempt to reach those who haven’t been seen in a while.

“We have about forty women on our membership list that no longer attend the Franktown Church. I announced the project and its intent for about three weeks before we started it,” Jamey Houghton, pastor of Franktown Church said.

In the month of February, each member of the women’s ministry group chose four names to pray over for thirty days, and then to make a reconnection attempt.

As with any church membership list, there were a lot of phone numbers that were no longer in service, and some on the list had moved out of state.

However, some of those that were contacted have been in correspondence on a regular basis.

One individual stated that she has been considering coming back to church.

Another individual who hadn’t been to the Franktown church in more than 25 years, and thought her membership had been removed, has requested Bible studies to reconnect with Jesus.

Yet, another was thankful that someone had reached out to her. She felt God was speaking to her through the reconnection attempt.

The Women’s Ministries team is continuing to pray for all the missing parishioners, that the Holy Spirit touches their hearts and lets them know that they are loved.

By Jamey Houghton – Franktown, Colorado…Sitting in his office at the Franktown church on a Friday afternoon Jamey Houghton, Franktown pastor, was just putting the final touches on his sermon.

Outside it was a beautiful day–white fluffy clouds in the sky. Suddenly a loud clap of thunder filled the office, followed by the sound of rain pounding the roof.

“As a motorcycle rider myself, I knew exactly what was happening—some riders were trying to get out of the heavy rain and were coming under the porch by our front door to try and stay dry,” Jamey Houghton, said.

Meeting them outside a conversation followed.  Soon, the couple revealed they lived very close to the church. They began asking questions about the church and what Seventh-day Adventist believe. As the conversation grew the topic of the Sabbath arose.

During the continuous rain a Bible study on the benefits of the Sabbath continued.

As the storm was coming to an end the man expressed, “I think God sent the rain so we could meet you and find this church”.

Mounting their bikes an invitation to attend the next day was given.

“As I preached, I scanned the audience and didn’t see them,” Houghton said with disappointment.

“The next Sabbath though, as I was walking up to the front pew to start the announcements, some people waved at me—I went over and they said “Hey! We are the motorcycle people,”’ Houghton added with excitement.

The couple has become regulars at the Franktown gatherings, studying the Bible and becoming involved in the Biblical Foundations Sabbath School.

The family is excited to share with everyone they meet how a rainstorm changed their outlook on life and opened new doors of faith to them.

“On that beautiful Friday, I believe God knew these dear people were searching for Him, and sent the rain to steer their Harley Davidsons right up to the front door of the church,” Houghton concluded.

By Jamey Houghton — Franktown, Colorado … The Franktown church has been partnering with Food Bank of the Rockies for the last year and a half. During the lock down, we missed one month of distribution. After that month, the health department allowed us to re-open with new guidelines for distributing food.

In the past, people have lined up with wagons, boxes and even empty laundry baskets to pick up food, passing through our tables loaded with food and choosing what they wanted. Our new guidelines require us to prepare boxes of food and have a drive-through style delivery.

So, a crew of volunteers from the Franktown and the Castlewood Canyon churches arrives at 9:30 a.m. when food is being packed into boxes for those lined up in their cars. They drive up, stay in their car and pop their trunk open. Our crew then loads the trunk with food boxes and they are on their way without ever getting out of their car. The volunteer group is made up of individuals from age seven to well into their 80s who come every second Friday to help make this happen.

We have been operating like this for several months and it has allowed us to continue to bless the people in our community with food for their families. These are people we see regularly and know many by name,” reports Jamey Houghton, church pastor.

Church prayer teams pray with the people in their cars while they wait for their turn to get food. “We are excited that we can continue to serve our community with the slight changes we have implemented,” Pastor Jamey added. 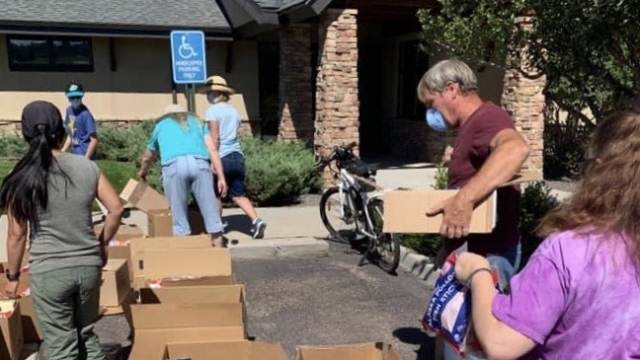 By Jamey Houghton — Franktown, Colorado…The Franktown church is coming up on one year partnering with Food Bank of the Rockies and the Castlewood Canyon Church. “Our church hosts food distribution on the second Friday of each month,” says Jamey Houghton, church pastor. We also work on advertising the event each month, he adds.

Jamey reports that they “usually have about 25 volunteers from church showing up each time to help register, set up and pass out food.”

Food Bank for the Rockies usually brings about 10 pallets of food to pass out and we have people come from Franktown, Elizabeth, Kiowa and sometimes all the way from Bennett.

“Several people come with trucks and if there is extra food that week they load up and take it to friends in need that can’t make it. They have a good mix of volunteers from both churches. “It is our favorite outreach! We really get to know the regulars and if they are open to it, we pray with them after we help load groceries in their cars,” he adds.

In very cold or snowy weather, the church sets up their fellowship hall and several times they had church members bring boxes of warm clothes for kids to pass out, which have been greatly appreciated.

We are excited to be reaching our first anniversary of our partnership, pastor Houghton comments.

–written and photo by Jamey Houghton