The administration acknowledged those with excellent grades and awarded scholarships in front of the assembled crowd, which included fellow classmates, teachers, and parents. All juniors and seniors with a minimum GPA of 3.5 who demonstrated qualities of scholarship, leadership, service, and character, were nominated into the National Honors Society (NHS) during the ceremony. Seniors inducted into the NHS were given a red cord and gold pin to wear at graduation to recognize their achievements.

Brooke Eitel, Campion senior, reflected on the event saying, “It is a huge honor to be recognized for all of the hard work I’ve put into academics the past four years. Hopefully being a part of the NHS will help me get scholarships so I can continue my education at a college level.”

Kent Kast, Campion’s vice principal of academics and NHS sponsor explained why it is important to spend time recognizing the accomplishments of the students.

“I believe it is meaningful to the students to be recognized for their achievements. When we are recognized, it makes us want to be even better. It is also a good example to other students of the satisfaction that comes with a job well done. The students are also eligible for scholarships in college that they might not be able to get without a membership in the National Honors Society.”

During the service, four seniors were chosen to speak and light a candle symbolizing the four pillars of NHS, scholarship, service, leadership, and character.

“I never really thought about being part of the NHS until I came to this event,” Tiffany Dien, Campion senior said. “It felt surreal to be actually lighting a candle, speaking, and getting our red cords and pins. It means a great deal to be recognized for my achievements and see my hard work pay off.”

–Haley Enochs is a senior at Campion Academy; photos supplied 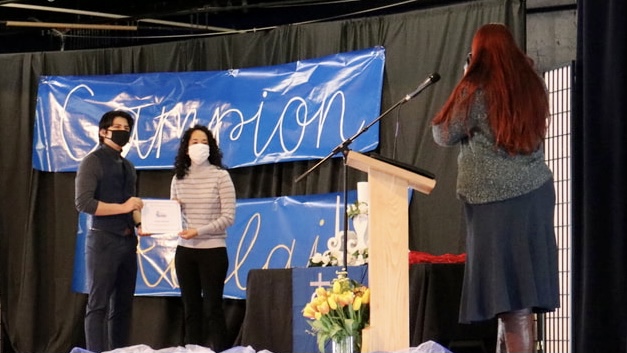