By Cynthia Risk – Waterflow, New Mexico … It all started with a little boy. He was learning to love Jesus more every day and wanted to walk with Him throughout his life. Well, let’s back up and explain what put the idea in his mind.

The Waterflow Adventist church, located 16 miles west of Farmington, New Mexico, began baptismal classes with a couple of teenagers in late 2019. The classes ran concurrently with prayer meetings. The teenager’s aunt heard about the study group and asked if she could join because when visiting the church earlier, she liked what she saw and was interested in joining.

Ezzack, an eight-year-old, also heard about the classes and decided that he wanted to be baptized. He talked to his mom about it, but she wasn’t sure he was old enough, and surely with his reading disability, he wasn’t ready for the big kid’s baptismal class.

But Ezzack is nothing if not determined, and he just would not let go. He kept asking and asking until finally, his mom approached the church in early 2020 with the idea. By then, Covid had hit, and everything was being rearranged to accommodate the new reality–including church service, prayer meeting, and most importantly, the mission school. All services were moved online.

The church decided that Ezzack and his sister Dyanna would have in-person school one day a week and online school on the other days. During the in-person days, they would go through the junior edition of the baptismal class.

The teenagers were attending school also and got Bible instruction through their regular Bible classes. The English teacher used Bible topics to teach them how to write research papers, so they were getting a double dose.

Tentative arrangements were made with Steve Gillham from La Vida Mission to come and baptize the kids in spring 2021. However, that plan fell through when he became sick and eventually was laid to rest in the Lord. So, now the question was, who could baptize these kids?

That is where it stayed for a few more months, but Ezzack would not give up! In September, a member brought the pending baptisms up again at a prayer meeting. They discussed and agreed to contact the conference office about the situation. During conversations, the church discovered Doug Inglish, RMC vice president of administration, would be in Pinon Hills on October 2 and could baptize them then if arrangements could be made on short notice.

Pam Goldtooth had attended that prayer meeting and mentioned that if there were going to be a baptism, her two teens would like to be part of it. Ezzack and Dyanna’s mother asked if she could be re-baptized with her kids. This brought the total to five candidates, but God wasn’t done yet.

Pam Goldtooth mentioned to her sister, Priscilla, who had been taking classes with the teenagers before the pandemic hit, that there would be a baptism. Priscilla confirmed that she believed everything and was then included with the existing group, bringing the total number to be baptized to six.

The service was planned for Sabbath afternoon, October 2, at the Piñon Hills church. Many individuals from surrounding churches came to support and witness the six baptisms. The crowd was larger than what the Waterflow church could seat, and members were thankful for the use of the Piñon Hills church for the special occasion.

“God has blessed us immensely here in Waterflow. We are a tiny little church without many resources, and most of our members are older, so we are especially grateful to be baptizing young people!  Please keep us in your prayers as we continue to nurture and grow these new members in the faith,” Cynthia Risk, Waterflow clerk and teacher at the Waterflow mission school, commented. 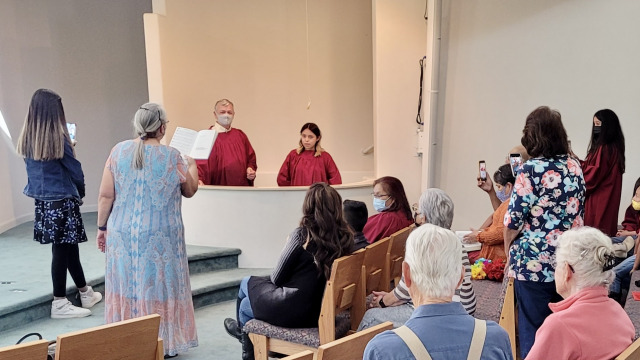 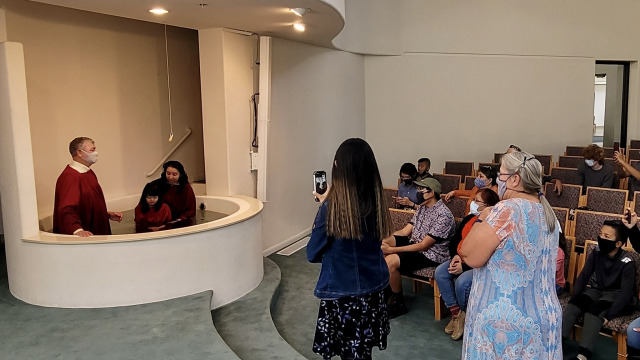 CAMPION HILLS ARE ALIVE WITH THE SOUND OF MUSIC