By Ryan Bell – Loveland, Colorado … Campion students celebrated Easter weekend by participating in the annual Campion Easter pageant which community members usually experience as a walk through the streets of Jerusalem during the time of Jesus’ life and ministry.

This year, out of an abundance of caution, no spectators were allowed at the event. Instead, the play was redesigned to be a drive-through experience.

Reflecting on the performance portion of the event, student director Brianna Bell commented, “What I enjoyed the most was seeing how hard the students worked to put on this event. You could tell that they were definitely doing this for God.”

Produced by Erin Johnson and Nancy Meszaros, the entire student body was involved in representing different aspects of the life of Christ including His birth, baptism, some of His miracles, the Last Supper, Gethsemane, the trial before Pilate, His crucifixion, and the Resurrection. Students in Johnson’s drama class composed and directed each scene.

The drive-thru display attracted some 100 vehicles which saw glimpses of the scenes as they witnessed Jesus’ life from birth to Resurrection.

The student who portrayed Jesus was greatly affected by the experience. “Every time I had to be lifted up on the cross, I thought about the actual pain Jesus went through because of how much He loves us. I have so much more appreciation for Him now more than ever.”

Erin Johnson, director of the Resurrection scene remarked, “I saw a lot of smiling faces as they drove away from the campus. We hope that the experience was a reminder that Jesus has risen and that He is coming back. Who wouldn’t be happy knowing that?”

–Ryan Bell is a senior at Campion; photos supplied 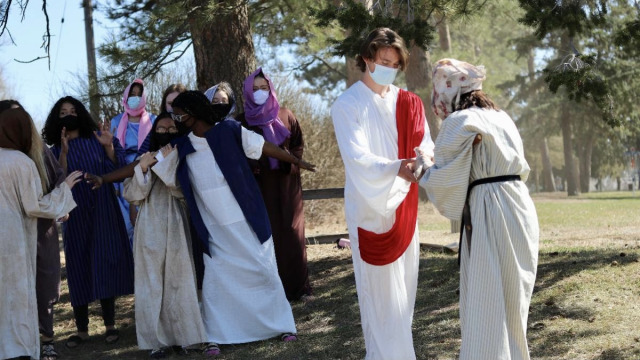