By Jon Roberts – Louisville, Colorado … “It feels great. I’m happy. I’m honored and humbled that the Lord has seen fit to have this recognition bestowed upon me. I didn’t do anything to earn it. If God calls, God equips,” Tim Jones, pastor of the Twin Peaks and Longmont churches, expressed during his ordination service held recently at the Twin Peaks church.

Jones, relatively new to Adventism, but no stranger to being a pastor, grew up in the Pentecostal church.  His family life included a devoted Pentecostal mother and an abusive father. After years of abuse, his mother gathered the courage to leave the abuse and move the family from Georgia to California.

Following high school graduation, Jones joined the military and recalled how, after leaving the military, he was able to reconnect with God.  “After the army, I got a job with the telephone company. On one of my service calls, I met a Baptist minister, and as I was leaving the job, he challenged me to read the Gospel of John. God spoke to me through that gospel. I was 24 years old at the time, and I realized that I needed this loving Savior.”

Jones adds, “I went to a Pentecostal church that I knew about and walked down front and said I wanted to be saved. I asked Jesus to come into my life and take away my sins. I felt as if a physical weight was lifted from my shoulders, and the dirty, filthy person I had become was being cleansed. In front of all of those people, I cried like a baby. I felt so good inside. I was a changed man–radically changed.”

This ordination service wasn’t the first for Jones, he explains. “I graduated from college, and graduate school, was ordained into the ministry, and was actively involved in the Pentecostal/charismatic movement. In 1991, I moved to Sacramento with my family, and in 1997, as a Pentecostal minister, I went through a divorce. After three years in that dark and withdrawn place, I knew I needed help getting my life back together, or I would die in this depression.”

Jones started to reread the Bible and experienced Genesis and Exodus with a renewed focus on understanding Scripture. He read about the Sabbath and wanted to know more. Thus began a months-long journey discovering the peace Sabbath provides.

The service, held in front of Jones’ church family, also included surprise visitors. Jones’ brother asked to be picked up at the airport because he wanted to support his brother.  As Jones arrived to retrieve his brother, he was surprised to see not only his brother but all of his siblings who flew out to support him, including his sister, who is a Pentecostal minister.

Throughout the gathering, individuals who played an essential role in Jones’ ministry thanked him for his service as an Amazing Facts evangelist and recognized God’s calling on his life. One speaker expressed, “Pastor Jones, you have touched many lives, and the fruits of your labor won’t be known till heaven.

Reflecting on the ordination service, Jones stated, “It means to receive recognition from the church and its leaders that God has called me to the gospel ministry. Someone else sees the hand of God on my life and that He’s called me for the proclamation of His Word, which is probably the highest calling that I could aspire to.”

Jones added that he would like to thank “the people who nurtured me–mother, sisters, and brothers–who stood with me when times were hard and encouraged me when I was feeling discouraged. And I also want to thank the Rocky Mountain Conference leadership for recognizing that I could be a candidate for ordination.” He continued, “I appreciate every one of those men and women in leadership in the Rocky Mountain Conference. I also want to thank my churches, elders, deacons, and all the church members, who’ve been so supportive of me. And so, I’m grateful. I’m truly grateful.” 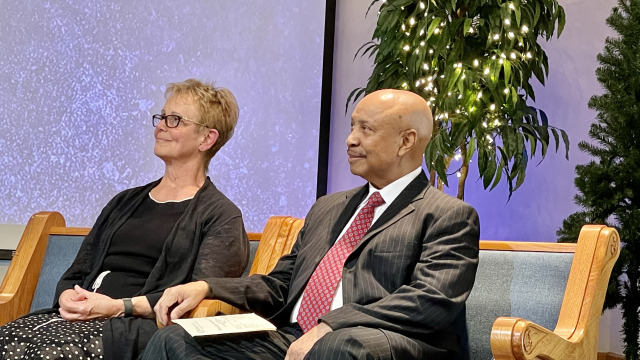