At the outset of the meeting, delegates re-elected Gary Thurber to serve as Mid-America Union Conference president. Dr. Herbet Morel Jr. was elected as vice president of administration; David VandeVere, treasurer of the Potomac Conference, was invited to join MAUC as vice-president of finance.

The session began with a devotional thought by G. Alexander Bryant, North American Division president. Bryant challenged the delegates, saying, “Don’t let your heart become overwhelmed and don’t let yourself get too stressed out with things happening in the world and the church … especially the church.” He added, “Jesus is interested in our mental health. Whatever is happening in this life, it is temporary. It’s not the final chapter. Let not your heart be troubled because Jesus is going to win!”

Changes to the by-laws, a regular maintenance item, became a topic of much discussion on whether or not to enlarge the MAUC Executive Committee from 35 to 38 members to ensure more voices are heard. Hispanic delegates spoke about the representation of this growing membership base within MAUC on the Executive Committee. One delegate expressed, “We would like to have a voice”. Gary Thurber explained that they recognize the importance of Hispanic ministries in MAUC and the conferences choose who will sit on the Union Executive Committee, and as part of recognizing the fastest growing membership base in the territory, the delegates voted the first Hispanic director of the Union.

Union College presented a report showing the healthy growth in enrollment and financial stability. The college representatives also showed that they have 25 million dollars in reserve for student aid.  A new feature of the college campus drew the attention of many in the audience when they presented plans to build the AdventHealth Fitness Complex in the next few years.

The final agenda item was the issue of pastoral credentialing. The topic, as expected, drew strong convictions from both sides of the issue.

“We are not here to debate women’s ordination. We are going to debate the policy,” Gary Thurber, MAUC president said at the onset of the lively hour discussion for women’s ordination in the MAUC territory. Thurber addressed the delegates stating they are called by God. “We are God’s Elijahs. We are the ones called for this territory.”

Mic Thurber, the new RMC president addressed the delegates on this issue by saying, “My personal support for this motion has been formed by 18 years of serving alongside educated, gifted, and called women to pastoral ministry. In the three churches I served as senior pastor, one or more female associate pastors each demonstrated the fruits of ministry over and over again.”

Dick Stenbakken, RMC delegate rose to the microphone to express his opinion. “I think as Adventists we talk a lot about mission, and we should. And I think we should not limit who can serve in it. We talk about present truth and I think the present truth is to ordain women along with men because it helps the mission of the church.”

Bryant spoke on the challenges he sees. “I personally stand in support of women’s ordination, but am challenged by this motion.” He said that this action doesn’t make women equal in the Seventh-day Adventist church. “Let’s ask the Lord for wisdom because this might help this particular situation but doesn’t help the entire issue. There has to be a way that we, as a church, figure out our way through this and keep pressing until we can get total equality.”

In conclusion, 256 delegates voted 82% to 18% to allow conferences to submit female pastors to the union for ordination making it one of the largest margins in favor of ordaining women to the Gospel Ministry.

Commenting on the historic vote, Doug Inglish, RMC vice president of administration, said. “The vote today means conferences can decide whether or not to submit female pastor names to the union for ordination.”

Voted to serve on the Union College association board to represent RMC was Darin Gottfried, and serving on the Union by-laws committee is Mary Lynn Green, RMC trust and planned giving director.

Closing the session, Gary Thurber challenged the delegates to “keep our arms around each other and when we go from this place, we will send a message to our churches that the Mid-America Union Conference is Seventh-day Adventist to its very core and loves the world church and is thankful to be a part of it.”

He also stated that he is grateful for each female pastor in the Mid-America Union. “I hope more than anything today they know how important they are to our mission and that their pastoral leadership is vital to our territory.” 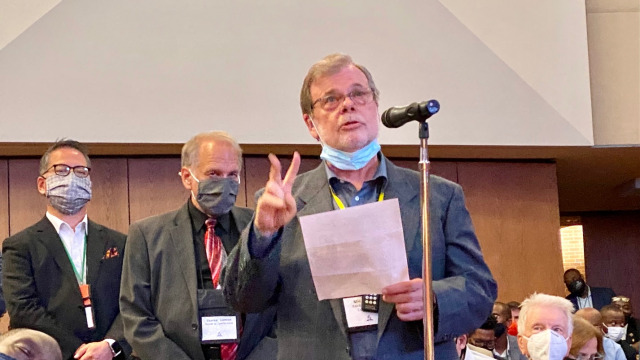 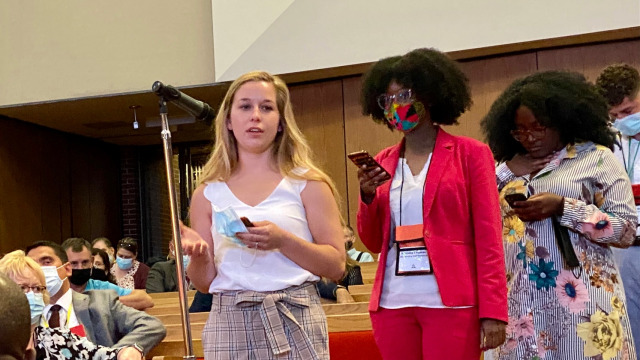 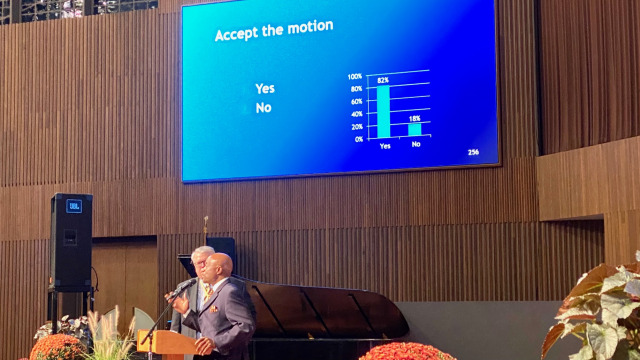