RMCNews – Denver, Colorado … Douglas Inglish is the new vice-president of administration effective April 1, 2021. Meeting in a Zoom conference on February 23, the RMC Executive Committee received and accepted the nomination of Inglish by RMC’s Administrative Committee to fulfill the remainder of Eric Nelson’s term. Nelson, who announced his retirement in January, will leave his position on March 31, 2021.

Inglish, who has served as RMC Property and Trust Services director for the last four years, is looking forward to returning to a position where he will use his pastoral skills.

“A pastor is a lot of things: an evangelist, a teacher, a counselor, and more. While I enjoyed all these roles, I was especially drawn to the administrative aspects of pastoring. It is perhaps what drew me to accept opportunities to serve at institutional churches and on various committees at the conference and union level, and eventually work as a departmental director,” Inglish said.

“When I came to RMC, my focus narrowed somewhat and I find that I have been more isolated from opportunities to mentor pastors and work with churches than I enjoyed as a senior pastor and as the personal ministries director.”

Inglish graduated from Andrews University in 1982 with a history major and a political science minor, and went on to serve as boys’ dean at Ozark Adventist Academy for two years. He left church employment to pursue other work opportunities, but returned to teaching a few years later. After a year of teaching, he was given the opportunity to go into full time ministry as a pastor where he spent the next 25 years serving rural multi-church districts, multi-pastor metropolitan churches, and churches associated with Adventist institutions, including Sunnydale Academy and Minnetonka Academy.

Prior to coming to RMC, Inglish served as the property manager and director of Trust Services, Stewardship, and Personal Ministries for the Minnesota Conference.

Inglish recognizes the scope of the position he is about to undertake.

“It is always exciting to consider a new direction in ministry, but when it becomes apparent that speculation is becoming reality, it is very sobering and extremely humbling. Eric Nelson makes it look easy, but I have worked with several people in his position and know it is challenging, so I am very grateful that he is coaching me and will be available as I face new responsibilities,” Inglish said.

Ed Barnett, RMC president, is confident of Inglish’s ability to step into the Conference administrative position. “Doug has been in ministry for over thirty years and he has worked in at least four conferences. He has worked in two conference offices as director of Trust Services. He has a good feel for how things work in a conference. I believe he will be able to step in and be a real asset to the Rocky Mountain Conference,” he said.

Following the vote of the RMC Executive Committee, Inglish commented: “I am looking forward to returning to aspects of ministry that I have missed, but with the awareness that I am untested at this level of ministry, so I appreciate the support of others and rely on the guidance of the Holy Spirit,” Inglish commented.

Inglish, a native of Indiana, has been married for 39 years to his wife, Susan. They have two grown children. Their daughter Chelsea is the youth pastor at Madison Campus Church in Madison, Tennessee, and son Joshua is a graphic designer in Chattanooga, Tennessee. 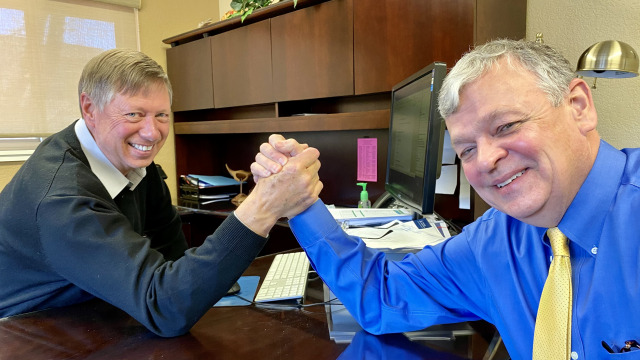