By Bentlee Barry – Loveland, Colorado … Campion students celebrated the end of the year, on May 16, by enjoying a fun and relaxed day at the last Student Association (SA) picnic. They gathered on the field for volleyball and “bubble” soccer, in which participants wore an inflatable bubble suit.

After an hour of competition between students, it was time for a class color run. Classes took a turn running a loop around campus while the other classes threw colored powder and cheered them on. “At first, I didn’t really want to get any color on me, but by the end I was covered!” said Brayan Martins, Campion sophomore.

Afterward, it was time to cool down with root beer floats and a water balloon fight.

Once the fun subsided, students reflected on the crazy and unusual year and the difficultly in planning events.

“Being on SA this year has challenged our team to think of COVID-safe activities. Maintaining distance and wearing masks had to be taken into account when planning activities like the banquet, fall party, or class scramble. We always looked for fun activities that most people would enjoy, and I am proud of our SA team for everything they have done this year to make the year so memorable!” exclaimed Kylie Wehling, spiritual vice president.

SA President Ryan Bell highlighted, “It’s been great to have a team that came together and shared the workload. It’s taught me to trust those around me and rely on people to help out. I’ve learned to value teamwork a whole lot more.”

Erin Johnson, Campion SA sponsor emphasized how proud she was of her student team this year. “This SA team as a whole has been flexible and innovative. They took what seemed like an impossible task (with COVID restrictions) and not only accomplished it but also made improvements for future years,” Johnson reflected. “I think our biggest accomplishment was the SA Banquet. We transformed the gym and made a night to remember. Even staff who have been here for many years said that it was the best banquet they have seen. I will miss this team tremendously but I am so excited for next year’s SA team.”

–Bentlee Barry is a senior at Campion Academy; photos supplied 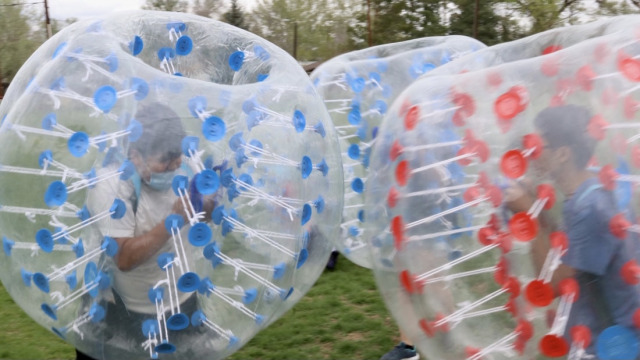 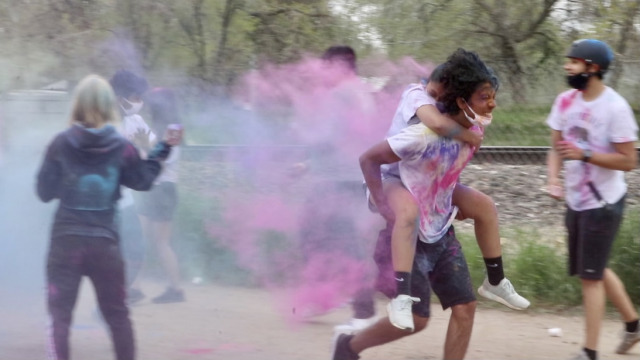 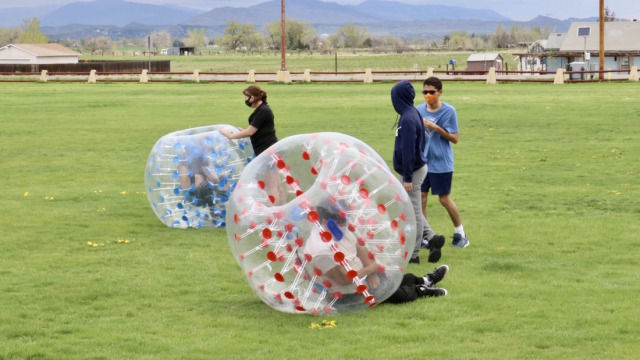 By Bentlee Barry – Loveland, Colorado … The campus of Campion Academy is once again filled with sounds of laughter, renewed friendships, and excitement as students return after a month and half being away.

Out of abundance of caution Campion started the second semester with online school for one week to allow any potential exposure to COVID over the holiday break to be extinguished.  As the campus and school begin in-person learning the health and safety protocols which helped Campion complete the first semester COVID-free will continue to be in place.

Students are deeply appreciative of having classes return in-person and are anticipating a strong semester.

“I mostly am looking forward to making new friends and building the friendships I have already,” said Sam.

“I look forward to growing spirituality, and I’m really excited for volleyball and trying out for girls’ soccer,” Blessing reflected.

Many students have set goals and are looking forward to this new year and school semester.

“I really just want to get through the semester and graduate with good grades. I want to get closer with the people in the church because they have good insights and spirituality,” Jynaya explained.

Lindsey commented, “I would like to keep my grades consistent and end with a 4.0. I really enjoy playing all sports, so I’d like to work on my athletic skills.”

Campion Academy staff are eagerly anticipating opening up more programs and trips this semester if the COVID regulations ease.

–Bentlee Barry is a senior at Campion Academy; photo supplied

By Bentlee Berry – Loveland, Colorado …As students enter the last few weeks of the semester and finals approach, it’s easy for them to become overwhelmed and stressed.

Stress isn’t always a bad thing; in fact, it’s proven to be beneficial. However, stress becomes dangerous when it is uncontrolled and at a high level. It can easily sneak up on teens and young adults, and when not managed appropriately, can create a snowball effect.

Everyone is different. Stress for some may be triggered by different events than for others. In higher education (high school and college), one of the most common sources of stress is academics. Students often worry about meeting academic expectations pressed on them either by themselves, parents, peers, or teachers.

Sandy Eickmann, a professional counselor for more than 20 years, shared some tips on how to cope and minimize stress levels.

Eickmann’s biggest tip for dealing with academic stress is to avoid procrastination. She wrote a book on this subject called Procrastination Guide. “The first step is to just get up and do it. Don’t let yourself have time to make excuses,” she said. This may seem easier said than done, but it’s quite simple. When you first get told about an assignment, start it immediately. This will save much stress and anxiety in the long run.

Tip 2: Give yourself a goal

“Secondly, you need to discipline yourself. Set a specific time and goal. For example, if you need to get an assignment done, tell yourself you’re not allowed to watch television (or check your phone) until you finish it,” Eickmann added.

Some teenagers and young adults suffer with test anxiety. “During the test, make sure to breathe in deeply and exhale quickly. While taking a test, don’t focus on what others are doing; just focus on yourself,” Eickmann explained.

During finals week, Eickmann encouraged students to get a good night’s rest and eat healthy, nutritious meals. “This will give you the energy and focus you need,” she said.

Pupils under stress may change their eating or sleeping habits and avoid normal daily activities. As students, it’s important to pay attention to fellow classmates. If you notice behavioral changes in a friend such as becoming agitated or depressed, make sure to check on and encourage him or her to seek help.

Remember, you’re not alone. Get together with friends to work on homework and prep for tests. Don’t be afraid to ask your teachers for help; teachers genuinely care about the success of each student.

—Bentlee Barry is a senior at Campion Academy, photo supplied

By Bentlee Barry – Loveland, Colorado …Campion Academy’s intramural program is keeping students active and healthy even while varsity sports are suspended throughout the pandemic.

During first quarter, students could choose to participate in one of three sports offered: flag football, volleyball, and disc golf.

The number of participants on each team was reduced to ensure social distancing and limit contact. Players were also required to wear masks and submit to temperature checks in order to keep everyone safe and healthy.

The games, fun to play for the students, also taught important lessons in communicating with each other as a team.

“At the beginning, we really struggled, but we were able to win because we communicated and worked as a team,” Kevin Perez, Campion senior said.

Ireland Anthony, Campion senior added, “We were undefeated because we all had chemistry and good communication with each other.”

A benefit of the intramural program has been the camaraderie it has created among students.

Perez reflected, “My favorite part of intramurals was getting to know my teammates. I didn’t know them well before, so it was really nice to grow my relationships with them.”

The second quarter intramural season will begin in November. Campion plans to continue keeping students active with precautions, while waiting for sports to resume safely.

–Bentlee Barry is a senior at Campion Academy; photos supplied 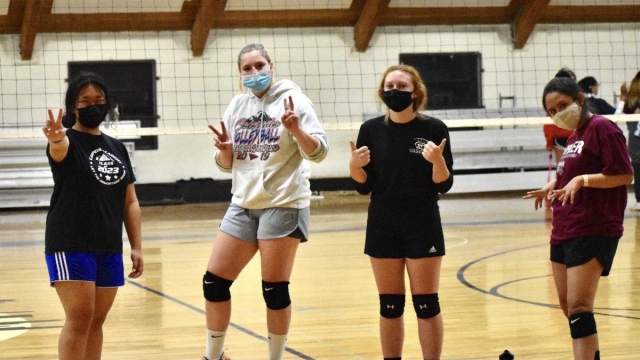 “It was a lot of fun and I definitely would go again. I was going in blind and had no idea what to expect. Using the restroom in the forest was definitely a challenge I had to overcome since I’m from Kansas and there are no mountains,” Jared Marcenaro, Campion junior, said.  “It was cool to see first-hand how huge the mountains really are. I now understand the significance of the phrase that God moves mountains because he really is so strong and powerful.”

The excursion taught the students to adapt to the ever-changing weather conditions in the mountains when their trip had to be quickly rescheduled because of snow, and then the location had to be changed due to a nearby forest fire.

The students hiked some fifteen miles in the vast outdoors, which included visiting Coney Lake in Colorado, camping by a river, and the highlight of the trip, witnessing a moose near camp.

“It was a lot more fun than I expected. The hike was hard, but the view and sense of satisfaction made it worth it. I was exhausted and my legs hurt a lot, but my friends were there and everyone helped each other out,” Airi Nomura, Campion junior, said. “I definitely want to go on another one, but maybe the hike could be a bit shorter and the days a bit longer.”

The experience was memorable for the students and the staff who sponsored the weekend away.

“I love doing outdoor activities and getting away from the rush and stress of life. I am able to grow and reconnect with God, and I love introducing students to that experience as well,” Jill Harlow, backpacking faculty sponsor, said.

–Bentlee Barry is a senior at Campion Academy; photo by Jill Harlow

By Bentlee Barry – Loveland, Colorado … Campion Academy’s international enrollees have faced a variety of challenges with returning to campus, mainly due to COVID-19 travel restrictions.

Students from Brazil were able to return home during the month of March, but are now faced with closed borders and are having difficulties returning to Campion.

Students from China were not able to return home at all due to the travel restrictions that began in February.

“Starting school online was discouraging. I think all of us hoped that things would be back to normal by now,” Balgamon said.

Eager to return to Campion, the Brazilian students have had to get creative in finding a way to travel to the United States.

Carol Silva, senior, along with Duda De Oliviera, junior, were able to get to Campion Academy in early August. They had to take a flight from Brazil to Mexico, and quarantine for 15 days. Then they were able to fly to Colorado.

“Although it was tedious and frankly very tiring, I am beyond grateful to be able to spend this year growing with God and being around all my friends. I am appreciative to all the staff and the students for following the rules to keep our campus safe,” Silva said.

Seven more students, from Brazil, are currently going through the same process in an attempt to attend Campion.

They arrived in Mexico on August 24th, and plan to be at Campion by the 9th of September.

“I first heard about COVID-19 in February when the outbreak began in China. My family was then already prepared for us to stay here and sent over 400 masks immediately. In March, the outbreak hit the U.S., my brother and I immediately began donating and handing out masks to Campions staff,” Jarrod Lang said.

During the summer the brothers stayed with Campion’s alumni president Codi Jahn and her family for the summer.

“They are very good people and have strong relationships with God. I was never sad or depressed during this time. My brother and I both love the U.S. and are very grateful to be here. We were able to get more in touch with God, and learn about his grace. Codi and Caleb Jahn took very good care of us and my family is extremely thankful,” Jarrod said.

–Bentlee Barry is a senior at Campion Academy; photos by Jill Harlow 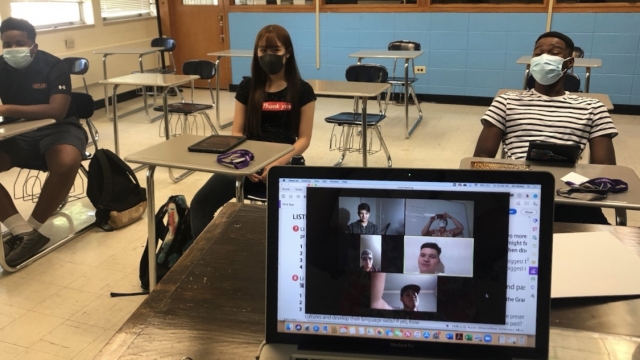