By Ryan Teller – Lincoln, Nebraska … Big changes came to Union College this past year, with renovations to several areas of campus bringing improvement to the learning and living experiences of Union students. 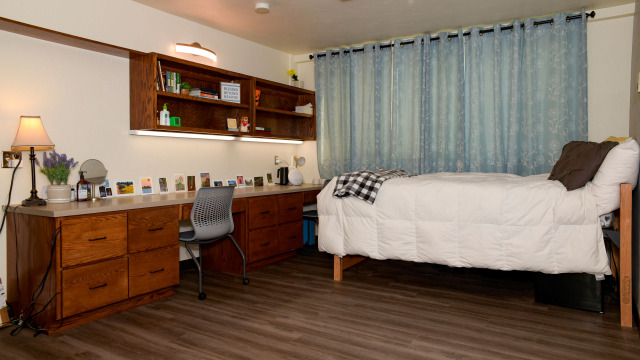 This summer, Maranatha volunteers installed new flooring, cabinets, and windows in another 27 rooms in the east wing of Rees Hall—bringing the total to 63 of 170 sleeping rooms in the women’s residence. Renovations began in summer 2019 with 34 rooms on the third and fourth floors, where mainly freshmen and sophomores live. Summer 2021 brought renovations to the first and second floors.

“Normally the east wing has been an area that the ladies avoided, and they would want to stay on the west wing,” said Emily Patterson, one of the women’s deans “Our east wing is completely full right now, and that is a first-ever in all my years here.”

The dorm renovations have a great impact on students, making them feel safer and more at home in their living space. “They’re sleeping, hanging out with their friends, and studying in the dorm rooms—that’s where they spend the majority of their time on campus, so it’s really important they have a nice place to stay,” Patterson said

Arlyse Wash, a junior transfer student who worked on the renovations this summer, is happy with the finished dorm rooms. “When I first saw them, they were definitely older and not the best in terms of the floors and walls,” she said. “Now I’m very happy to be living in my room, and since the renovations, no one has lived there except for me. The color of the floors and the cabinets really give it a modern feel. It’s completely different, and I love the upgrade.” 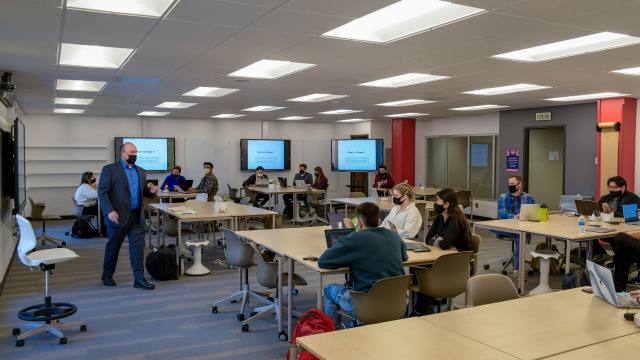 Thanks to a generous gift from AdventHealth, one of the business classrooms on the third floor of the Everett Dick Building has been renovated into the AdventHealth Innovation Classroom. Plant Services installed new carpet and windows as well as new tables and chairs arranged in pods rather than rows to create flexible workspaces. Eight smart touchscreen TVs were also installed to enhance student engagement. Finishing touches are in progress, meant to represent Union’s brand and enhance the interactive potential of the classroom.

“Before, the layout made it really difficult to see the board from the back of the room. If you were sitting at the front, there was more pressure to answer questions, but in the back of the room it was easier to zone out and disengage,” said Shelby Jongema, a junior business administration major. “I think it’s a better environment now. I can see my classmates better, so it’s better for collaboration and group discussion. It’s easier to feel engaged even when you’re at the back of the room.”

“I think that we’ve found quite a few more learners in this room when the technology is used,” said Jodie Trana, one of Union’s business professors. The smart TVs allow multiple students to work on the same device, making collaboration on group projects and class activities much easier. “I think that as much as possible we need to keep up with what’s going on in the real world. We need to be able to provide the kind of technology and the type of experiences that they’re going to get outside this classroom.”

“From their first year on, we want to get students involved in the classroom. We want them to start working in teams,” Trana said. New teaching techniques are designed to provide students with necessary collaboration skills employers are looking for. “I hope having this classroom, where it’s set up for group work and group activity, is going to lead to that collaboration. And we believe that collaboration leads to innovation, and that’s going to help make them successful.” 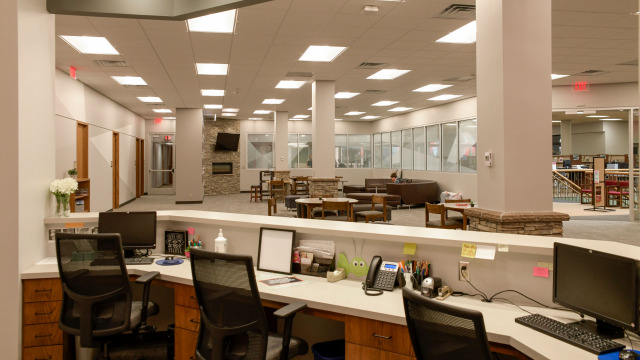 Last school year, Union launched the Student Success Center thanks to funding from a U.S. Department of Education Title III Grant. The grant provides funding for higher education schools to invest in resources and infrastructure to better aid at-risk students.

The new center for academic and coaching resources is now housed in a renovated section of the library. “We wanted to have a one-stop shop for student and academic resources. Students can come in here and we can help with any questions they have and provide them with any service they need. And if we don’t have what they need here, we know where to send them,” said director Taryn Rouse. Student Success provides life coaching, tutoring and academic assistance, career coaching and disability services.

“Prior to being in this building together, three of us were downstairs in the Career Center, three other coaches were in the old Teaching Learning Center. Student Services was downstairs,” Rouse explained. “We were in three different areas, which is not conducive to functioning as a team or for students to know where we are.”

Now, Student Success is thriving and serving students more effectively—including providing a life coach for all first-year and transfer students to better prepare them for their time in college. “Getting students engaged academically with activities and with each other is just one of the biggest keys to their success,” Rouse said.

Rouse especially emphasized that the Student Success Center is open to all students, no matter their background or their level of need. “Any student who wants to come in for help, we’ll talk to them,” Rouse said. “The Student Success area is for everybody. We are here for all students on campus, not just freshmen. This is what we care about, and it’s what students are owed. It’s our mission.” 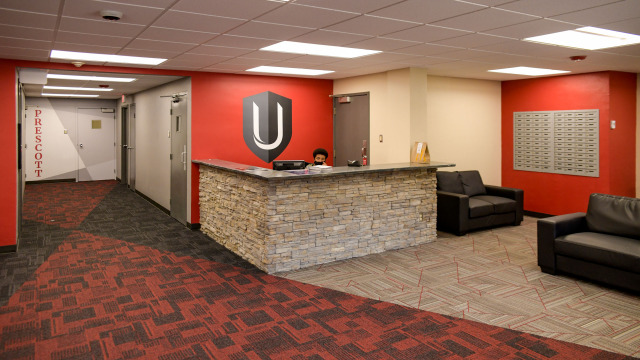 Plant Services renovated the Prescott Hall lobby last summer, repainting the walls and redoing the ceiling tiles and lights. The biggest project was removing the old student workers’ desk in the lobby and replacing it with a brick one in a new location.

“It looks significantly better, we’re excited about it. We really needed the facelift,” said Daniel Force, one of the men’s deans. “We’re happy for the residents to have something new, and we hope we can continue to have more improvements in the dorm.” In the future, he hopes to renovate the rooms in Prescott along with installing an announcement monitor in the lobby. “We just want to keep making Prescott Hall a better place to live.” 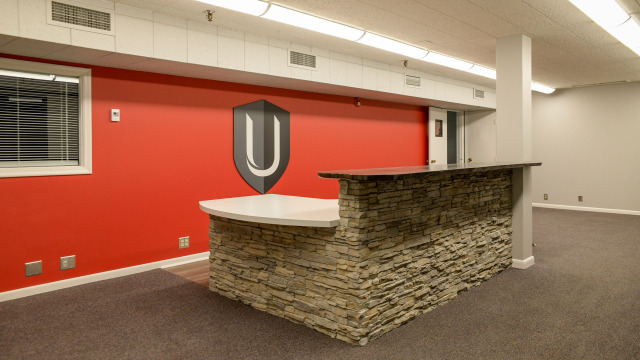 After the Student Success Center opened last year in the library, renovations began on what used to be the Teaching Learning Center to become a new home for the Student Life team. Student Life is responsible for overseeing many activities and services offered at Union, such as varsity athletics, residence hall management, Student Association activities, and more.

Currently the primary Student Life office is located on the first floor of the Everett Dick Administration Building. However, several of the staff are scattered around campus. The new offices renovated by Plant Services will provide a central location for the entire team. Kim Canine, vice president for Student Life, also believes moving the team into the Student Center will help her goal to turn the center along with the entire Don Love Building Atrium into a hub of student activity—which would include the library, new Student Success Center and Campus Store.

“The renovation will help us provide better services to our students and enhance their experience beyond the classroom,” she explained.

This article was originally published on the Union College website