RMCNews – Denver, Colorado … “To you, this is another staff meeting, but to me, this is a big deal,” Mic Thurber said to the conference office staff at the beginning of their monthly meeting, September 7.

Meeting the staff officially for the first time, Thurber chaired the meeting.  After a worship thought by Mickey Mallory, RMC ministerial director, the new president began by sharing how he is eager to start his ministry in the RMC territory.

Thurber stated that when new leadership arrives, there is often anxiety among the staff concerned about how this change will affect them.  Thurber explained his leadership style comes down to “I work for you,” referring to the fact he is not a micro-manager.

He said he has a pastor’s heart and sees his role as president to be the office staff senior pastor. “I’m still a pastor,” commented Thurber.

Several staff expressed their joy in welcoming Thurber and Gottfried while appreciating Doug Inglish, vice-president for administration, for his maintaining the RMC ship these past few weeks.

The meeting closed with a renewed emphasis by Thurber explaining evangelism in RMC starts in our community by being loving and caring neighbors. 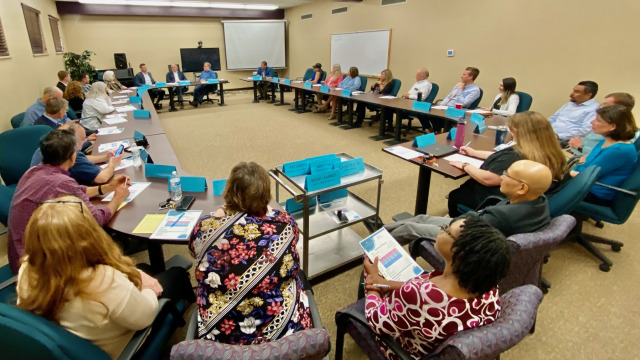