By Chaplain Major Lane F Campbell — Colorado Springs, Colorado … On March 12, a travel interruption letter, followed the next day by a letter limiting group size, was sent to those who have completed basic and advanced training (permanent party) and students and civilian personnel at the United States Air Force Academy (USAFA).  It was decided that the Freshmen Recognition would be suspended due to the new limitation guidance for COVID-19. This immediate stop to training resulted in a decision to send all lower classes home and retain only seniors or Firsties at the campus with the goal of graduating the class of 2020 and keeping them healthy. Within days, as with many Rocky Mountain Conference pastors, an immediate change occurred for providing religious services and spiritual care. New measures were implemented to provide all denominations with virtual religious services.

Life changed quickly for the remaining Firsties as well. Classes paused for several days to allow for the transition from classroom instruction to on-line instruction. The dining facility provided take-out services only and students were required to eat in their dorm rooms alone. Squadron social activities were cancelled, gym use was prohibited and travel outside the campus was forbidden. Only mission essential (ME) personnel (which includes chaplains), were allowed to be with the students. Life changed drastically as liberties were limited, all in the hopes of keeping cadets free from COVID-19 and getting them to their May 28 graduation date.

Tragically, on the morning of March 26, the former roommate of a Squadron 8 cadet discovered that he had taken his own life. Chapel teams assigned to the squadron gave chaplain care for the cadets, the faculty and staff and the first responders. The campus family was devastated. While I’m not the chaplain for Squadron 8, my wife and I sponsor a student from this Squadron, so I quickly realized that I needed to be there for her and her fellow squadron members whom I have come to know through our sponsorship.

Two mornings later, another cadet in Squadron 7 also tragically took his life. By Monday morning, the Chief Staff of the Air Force (CSAF), Chief Master Sergeant of the Air Force and the Secretary of the Air Force (SECAF) were on campus visiting with students, faculty, staff and permanent party members. During the afternoon session, members from the Crisis Action Team, commanders, professors and students shared their perspective with the SECAF in which I participated as a chaplain and as a member of the Crisis Action Team. “Everything we are dealing with here, stress, change, challenge, pain, hurt and loss due to COVID-19 measures and the aftermath of these two suicides all have a spiritual foundation,” I said. “The challenge we have is we don’t have enough chaplains or mental health professionals entrenched with these cadets and permanent party here at USAFA during this unprecedented time.”

The professors in the room presented an earlier date for graduation and commanders requested more entrenched mental health and chaplain support in their squadrons. By the end of the week, five more Air Force chaplains from near-by bases (Wyoming, Colorado and Kansas) were brought in and the graduation date was moved to April 18.

Spiritual care to cadets was given high priority from CSAF and I checked on Squadron 8 members and my newly-assigned squadrons continuously. Unit visitations were implemented by the Crisis Action Team and care was given and made available around the clock. We greeted cadets during breakfast, lunch and dinner at the dining facility and walked through the dorms of the two squadrons assigned us, visiting with students in their spaces. Certain restrictions were also lifted.

Collectively this helped us meet our goal when on April 18, rather than a planned virtual speech, Vice President Pence personally arrived on campus and gave the commencement address for the USAF Academy class of 2020 with no positive COVID-19 cadets. Social distancing of eight feet was in place during the graduation ceremony and we successfully met our mission goals–graduate the class of 2020 and keep them healthy!

Squadron 8 members chose me as chaplain for their commissioning ceremony, held the night before graduation, which allowed me to give them parting words and encouragement as their chaplain. I shared three things they should take from their USAFA experience:

This past graduation weekend and commissioning service for our 2020 cadets, was certainly a highlight as a chaplain in my Air Force career. God calls Seventh-day Adventist workers to be available for all types of ministries. What a calling we have to share the love of God and the soon coming of Jesus in the environment in which God has called us. 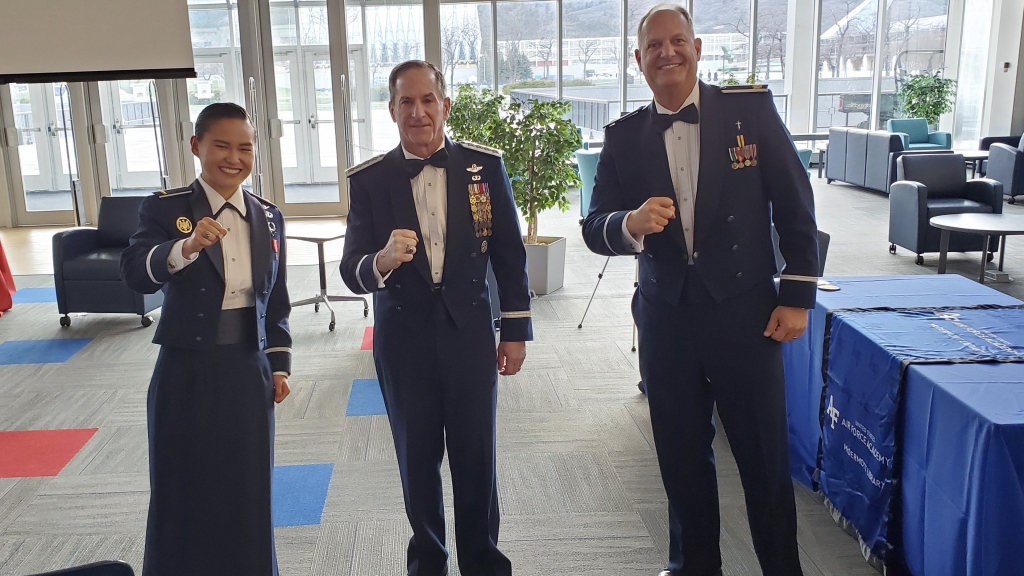 Tragedy in the Amazon Basin of Peru

Adventists and the 1918 Influenza Pandemic

WAKING UP WITH CHRIST DURING COVID-19 PANDEMIC