By Samantha Nelson — Cody, Wyoming … The Cody Cowboys Pathfinders have been busy building and creating their first-ever Christmas float for the annual Cody holiday parade.

The young Pathfinders wanted to find a way to help people in the community focus on Christ’s birth this holiday season, so the float, built on a trailer bed, featured the traditional manger scene with Pathfinders dressed as the characters in the story.

While some of the kids were a little nervous at first, they got into their characters as they boarded the float, which was driven by Troy Jeffers, Cody Cowboys Pathfinder leader, through downtown Cody.

“It was a cool experience getting to be a piece of the fun on the float,” Kat, Pathfinder club member, said.

Another Pathfinder, Micah, enjoyed the experience and is looking forward to next year’s event.  “It was fun, and I’d like to do it again.”

Large crowds, gathered on each side of the street, eagerly clapped for the floats and echoed the shouts of “Merry Christmas!” and “God Bless You!” with their own return shouts.

Sherry Taylor, Powell Adventist Church member, was grateful to the community for remembering the real reason for the Christmas season.

As the parade neared the end of the route, the Cowboys were having fun, and they were thinking ahead to next year in hopes of building an even bigger and better float, possibly with live animals.

“The float was a great way to bring our Pathfinder group together, and it was so much fun,” Cedar Jeffers, Cody Cowboys Pathfinder Teen Leadership trainee, said. 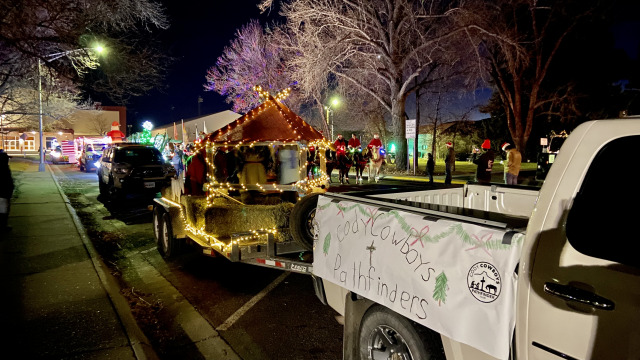